After decades of dreaming about becoming a dentist, Hermey the Elf was named DDG (Dental Do-Gooder) in November by the president of the American Dental Association ADA)!

“Hermey’s passion for dentistry coupled with his devotion to helping others feel good about themselves inside and out, deserves recognition,” said  ADA President Maxine Feinberg, DDS. ”I know Hermey the Elf, DDG, will continue to inspire young people and those who are young at heart to follow their dreams.”

Hermey, Rudolph and some of their friends have also been honored on a postage stamp.  These stamps celebrate the 50th anniversary of the much-loved holiday classic.  Here are Five Fun Facts: 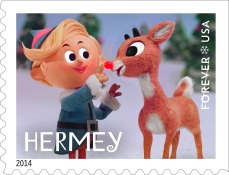 Even though we are celebrating Hermey, DDG’s achievements there are other notable elves that we should visit.  Who remembers the Elf on the Shelf?

Elf on a shelf is a special “spy” elf. This elf was sent from the North Pole to help Santa Claus manage his naughty and nice lists.  After the elf arrives and is named, the scout elf receives its Christmas magic and can fly to the North Pole each night to tell Santa Claus about all of the day’s adventures. You definitely want to stay on this elf’s good side!  The next day the scout elf returns to its family and sits in a different place to watch the fun. Children love to wake up and race around the house looking for their scout elf each morning.  Some came offering candy, like a chocolate sampler box.

Finally, the serious elves.  Some believe that Santa employs six elves.  Some think that there are as many as 13 elves living with Santa to help him. Elves are the children of Gryla and Leppaludi and are very clever. They help Santa to design toys and process requests of children that are sent to them through snail mail or emails. The popular Western names of the Christmas elves helping Santa Claus are:

Now, you know more than any of your family members about those mysterious elves! The ambitious Hermey.  The “Traditional”, like Elf on the Shelf and the “Real” (?), like Santa’s Helpers.  Add them to your celebrations and may you remain forever young this holiday season.